Hi there book lovers, your friend Sara here! If a book is written for kids, shouldnt we ask the kids to tell us how they liked it?

Thanks for pouring in all your wonderful entries 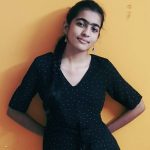 Today’s review of an iconic book is by Sai Deeptha ,a 9th grader in N.S.N Memorial School, Chennai. She loves reading books and not being able to buy more books is depresses her. 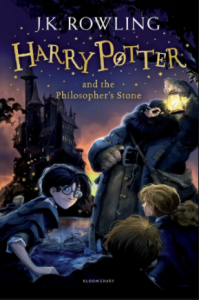 When I first saw the cover of  “ Harry Potter and the philosopher’s stone,”  I thought that it would be a very droopy and boring story, but it was so not what I had expected. The cover has him, Ron, Hermione  and Hagrid,the school’s gatekeeper, of whom he is very fond, with Hogwarts in the background.

The saying ‘ Don’t judge a book by its cover’ is used quite literally here .

I was engrossed  in the book and I was experiencing all those adventures .

My friend recommended this book to me, but I tried to stall as much as I could, to not read the book. I did not even try to watch the movies.But, as I started  reading it, I found it very compelling and kept reading it.

The story is basically about a young wizard called Harry Potter , who had  survived a death curse  and was living with his cruel aunt, uncle and cousin  because his parents were killed trying to save him.But as he turned 11,he was  taken to Hogwarts, a first rate wizard school. He was to be trained to be a  skilled wizard. There, he made friends with his best friends for life, Ron  Weasley and Hermione Granger. They have all sorts of adventures together  during the quest to protect the philosopher’s stone from the villain, Voldemort, who had tried to kill Harry Potter.

The lead character is Harry Potter, who is a powerful young wizard. He is  undeniably brave and extremely loyal to all his friends and family, so much so that they don’t mind giving their lives for him. It is interesting that even after  so much pain and suffering, he stayed strong and continued fighting. That is really impressive .

In this story , Harry is mistreated and shunned by his own family and lots of people would be questioning their existence.But, even though his parents weren’t alive and he was cruelly treated by his aunt and uncle, he was still  loved by his friends and they supported him no matter what. I feel that the central idea of the story is that love is more powerful than anything and it is proved when his mother’s love actually saved him from Voldemort .

The illustrations of the book is what that gave the book its magical feel but as I said before, I’m not very fond of the cover. The writing style makes me feel like I’m with them, experiencing all the adventures and undergo all they went through .

My favourite part of the book is when Harry,Ron and Hermione take on a fully  grown Troll all by themselves.It is really impressive how they work together  and vanquish it without any proper knowledge of spells .

My takeaway from this book is that love is more powerful than anything and even a powerful villain can be conquered easily .

The one thing that I would change in this book is that Draco Malfoy can be portrayed in a nicer way, so that he might not seem so cruel and arrogant. Draco is forced and brain washed by his parents to act the way he does ; to be as if he was better than anyone. I would have made Harry and Draco have an almost civil relationship and defeat Voldemort together .

Any person above 8 years can read this.It is in a very easy language and is appealing to all age groups.

I would definitely rate the book 5/5* because I couldn’t put it down and was so engrossed in the book that I didn’t notice what happened around me at all.