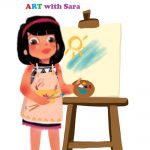 Hey everyone, your pal  Sara here! Welcome to my vibrant ‘Art with Sara’ section for kids.

Here I publish the works of young artists who share their beautiful work and their passion for artwork in form of a write-up!

Hiroshima Day is observed on August 6th every year. It aims to promote peace. This day is a reminder of the bombing attack on Hiroshima by the United States during World War II.
In 1945, the United States dropped an atomic bomb on the city of Hiroshima. The nuclear bomb that was dropped in Hiroshima city was named ‘Little Boy’. Three days later, on August 9, the second bomb was dropped in Nagasaki. The nuclear bomb that was dropped in Nagasaki city was named ‘Fat man’.
The explosions killed thousands of people. Apart from the killings, the Japanese also suffered from terrible burns and radiation sickness.
Hiroshima day aims to raise awareness about the dangers of nuclear weapons and nuclear energy.
This sad incident reminds us to put peace first every day.