Hey everyone, your best friend Sara here!
Christmas came with a whole lot of festive cheer. I hope it lingers on.
Here is 7 year old Kiaan Raj Nathan from New Delhi, sharing a sweet account of his meeting Santa’s elves. 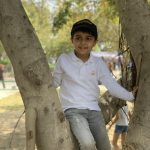 Kiaan is a big fan of dinosaurs and animals of the prehistoric . His hobbies are reading, playing, chess and drawing. The Enchanted Forest has been his favourite book so far. He goes to Modern School, Vasant Vihar  and is a student of Word Munchers.

At the stroke of midnight, I woke up to the sudden sound of a whistle. I went  outside and saw a train. There was a man with glasses. He said to me, “Are you coming to Santa’s workshop?”

I excitedly replied, “Yes. I would love to.” The train was red, green, white and  black in colour. We reached Santa’s workshop in about twenty minutes. We  were greeted by Rudolph, Dasher, Cupid, Vixen, Blitzen, Donner, Comet and  Prancer.

Santa’s toy factory was enormous and was sprawling over acres of land. At the  entrance I saw a forest where elves were holding bows and arrows, guarding  Santa’s workshop. As I entered, I saw other elves making lots of toys, video   games and sport sets. It was fascinating to see the elves use magic to create  gifts for children of the world. They were extremely quick and efficient and were really working hard, day and night.

Soon I met Santa Claus and Mrs Claus. I asked Santa if I could help the elves in  packing the gifts. But the elves were much quicker than me. I asked Santa if I  too could be as efficient as the elves. He then flicked his fingers and granted  me the power that the house elves had. Soon I was quicker than the house  elves in packing the gifts. I managed to pack thousands of gifts.

At the end Santa gave me an extra gift for Christmas. He gifted me a bell that  would always keep me happy!