Hey friends, Sara here!  I love sports and I couldn’t be more excited to see your entries pouring into my ‘Sports’ section. Keep them coming. 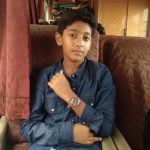 Paralympics is seriously underrated in our country. The entire idea of differently-abled people participating in various sports events at an international level is fantastic but because of a few reasons such as perhaps a low literacy rate or less awareness of the fact that there is even a Paralympics, people are really missing out on a glorious wonder of the world.

I want to tell you the inspiring story of Devendra Jhajharia, a talisman for us at the Paralympics and double gold medallist in Javelin throw.
He was born in the Churu district of Rajasthan but why does he participate in Paralympics? That is because of the fact that he at the tender age of 8, touched a live electric wire while climbing a tree which resulted in the amputation of his left hand. Now I always wonder that how would a boy, who isn’t even in his teens yet feel when his arm has been amputated. He would have been devastated.
On top of that, he lived in a small village where people hadn’t even heard of Paralympics so let’s take a minute and think that what would have been the obstacles he had to overcome; mental trauma, bullying and most importantly making his parents believe in him and prove that he can make a career in javelin throw in such a country, where these career paths are frowned upon because of stereotypes.

From a disabled boy to a Paralympics gold medalist, Devendra Jhajharia has repeatedly proved that no disabilities are going to stop him from fulfilling his ambitions.

Devendra jhajharia has not only won a gold medal in the 2004 Paralympics but a gold medal in the 8th FESPIC games in south Korea in 2002, a gold medal at the IPC Athletics World Championships in Lyon in 2013, a silver medal at the 2014 Asian Para games in south Korea, a silver medal etc. At the 2016 Summer Paralympics in Rio de Janeiro, he once again won the gold medal for Men’s javelin throw at an F46 event, which is just a classification for javelin throw events with players who are disabled. That makes it a marvellous 5 gold medals and 2 silver medals in his entire international career.
And now he has another Paralympics silver medal this year!
All I can say is Devendra Jhajharia is the living example of how one writes his own destiny. The entire nation salutes him for his impeccable job at the javelin throw events. May he live, prosper and continue to accomplish and achieve such brilliant heights in the world of javelin throw.

Did you like this? Do not miss –
Paralympics Super Hero- Girish Sharma in Badminton