‘The Cat and the Bird’ by 7 year olds Rajveka and Vaanya, Tangram#25 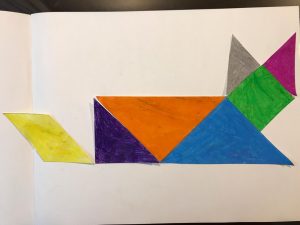 Once there lived a furry brown cat called Toffy and a pretty purple bird called Lavender. One day Toffy was playing hide and seek with Lavender in the garden. Toffy was hiding behind a tree. Behind that same tree there was a well.

By accident Toffy fell into the well. She called for help but the people did not help her as they thought she would bite them. Lavender found Toffy and tried  to get her out of the well, but could not. She flew as fast as she could and got  all her bird friends to help Toffy.

Finally they were able to get Toffy out of the well. Toffy was very thankful and  promised that she would give her a pack of chocolates next time. The two of them went to play and lived happily ever after.