Hey everyone. Your new best friend Sara here! My friends at the Little Readers Nook have been upto some really fun activities with tangrams. Do you want to try it out too? Send it to me in your comments.
Look what a wonderful story 7 year old Ahaana from Mumbai came up with looking at the picture of the Tangram. 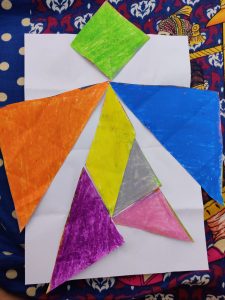 He remembered meeting a person who hadn’t found his special talent yet. So the emperor thought that this person might have a talent for making tiles.This will be a wonderful opportunity to explore the young man’s hidden talent. He called all the experts and the young man to bring the tiles design.

The young man agreed happily. After a while he finished it. They were beautiful. They were of mystifying colour. He trod over the soft grass to the emperor’s castle.

But he had to cross a river to reach there. He saw a nice boat waiting but without an oar. He took a tile and used it to row the boat. After a while, the tiles became too heavy for him and it sunk after dropping from his hand. The man dove in the water to get them. Once he got them back, he remembered that he had a handkerchief in his pocket. With his magical hands he dried the tiles and made them extra shiny.

After that he took them to the emperor, bowed and said ” presenting the tiles”. The emperor took it and he stared in amazement to the glow and shine of the tiles. The emperor had finally helped the young man in finding his hidden talent.