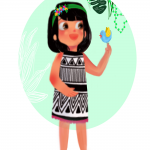 Here is 7 year old Rajveer Chowdhary from Kolkata sharing an essay on why he is awed by the eagle.

The eagle is one of the most powerful birds.
One evening I spotted an eagle on my terrace.
It soars high above the sky spying its prey with its keen eyes. The bird is  notable for their powerful eyes. It has an ability to see a moving rabbit from a mile.
They build their nest in a remote place as high a cliff where it cannot be  disturbed. It makes its nest from sticks which is used year after year. Eagles incubate their eggs for about 35 days. Eagles protect their chicks from the cold and the heat.  On sunny days they spread their wings to produce shade for the chicks. I was very amazed to know about how they push their young ones to fly out from the nest, in a video.
Sometimes in the morning I see an eagle and get mesmerized by its powerful eyes and strong feet.
They are spotted mainly in Madhya Pradesh, southern Orissa and Nilgiris districts.

Often, they feed on rabbits, hare, sea birds and even on dead animals.

Occasionally, it can be seen on Discovery Channel from which I gained the knowledge.

Hey, Sara here again. Did you enjoy that heartfelt write up? How about some some cool facts about eagles?
Cool Fact#1 : Eagle’s beak bends with age.

Eagles may be apex predators at the top of their food chain, but they don’t stay that way forever. Aside from the weakening of its talons, eagle beaks warp and bend upon ageing. Once their beaks change shape, it’d be hard for them to feed.

Read more about it here – https://facts.net/nature/animals/eagle-facts

Cool Fact#2 : The largest bird’s nest was built by a pair of bald eagles.

Eagles have got into the Guinness book of world records!! The largest bird’s nest was built by a pair of bald eagles and possibly their successors, near St Petersburg, Florida, USA. It measured  9 ft. 6 in wide and 20 ft. deep. It was examined in 1963 and was estimated to weigh more than two tonnes (4,409 lb).

Wow, thats really cool, right? Would you want to get published on this global writing platform and become a Bookosmian? Here is how to go about it-
https://bookosmia.in/submit-a-story/