Hi there everyone, your friend Sara here.

Independence Day just passed by but 10 year old Shashwathi V from Bangalore would like us to think beyond one day and beyond a few popular names to understand better the meaning of independence.

Here is a much needed write up on the courageous queen and freedom fighter from Karnataka, Kittur Rani Chennamma.

Shashwathi V is a student of CMS NPR, Bangalore.

On 15th August, our 74th Independence Day, my school asked us students to  dress up as freedom fighters. I dressed up like ‘Kittur Rani Chennamma” for  my class celebration online. 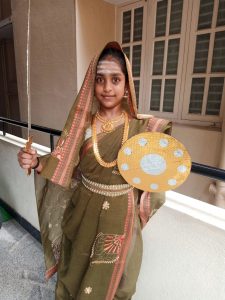 Kittur Rani Chennamma was born on 23 October 1778, in Kakati, a small  village in the present Belagavi District of Karnataka, India. She learnt to ride  horses, sword fighting and archery in her childhood. At the age of 14, she got  married to Raja Mallasarja. She became the queen of Kittur. After her husband  and only son died, she took over the kingdom and adopted a son but the  British refused to accept her son.

The British tried to take over her kingdom thinking she will easily give up but  she fought them in a war in which she won. The British, angered by the defeat,  fought more wars in which despite her bravery she lost and was put in jail  where she died.

Like Jhansi Rani, who came several years later, she made a mark on the  country for her courage.

She was one of the first female freedom fighters to resist British colonization.  She is a national heroine, well known in Karnataka and a symbol of the  independence movement in India. 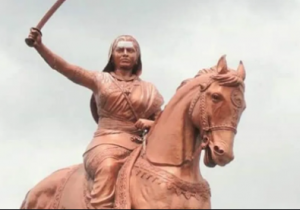 Here is one of the inspiring lines she said in response to the British demanding high-taxes, that people remember her best by:

“Why should I pay you tax (Nimageke kodabeku kappa)? Are you my brother, sister, relative or a friend?”