Not so happily ever after, Cinderella revisited- Read story with Sara

Bookosmia’s favourite story theme is “Twist in the Tale” , where kids rewrite the endings of their favourite fairly tales.  Read this great improvisation of the classic Cinderella tale, by 15 year old Vinsha Seth from Kolkata.

Not so happily ever after, Cinderella revisited- Read story with Sara

“ And thus, Prince Charming and Cinderella lived happily ever after.”
The lines spoken on their wedding day, the day everyone had called them perfect for each other and had predicted they would live happily ever after.
“Happily ever after, my foot!” grumbled Cinderella as she scrubbed the dusty ceiling filled with cobwebs.
When she had gotten married, she had imagined a palace with dozens of servants and a lavish wardrobe but where she had ended up living was a rundown house where the only food she got was from the meager edible plants that she could sometimes manage to collect. Marrying the prince had been her ultimate dream but one year into their marriage, Cinderella realized that it had all just been a dream. All the prince did all day was gamble and drink all night. They had lost all their property and even their palace had been captured by the neighboring King of Enchancia.

“Biiing” came a loud sound followed by deafening bang on the already dilapidated wooden door which blew out some more dust showers.
“Please let it not be him,” she prayed. However her prayers failed as the prince entered. What a few years of poverty could do to a person! The prince looked unsteady from all the alcohol while the shards of his best suit hung from his thin frame. 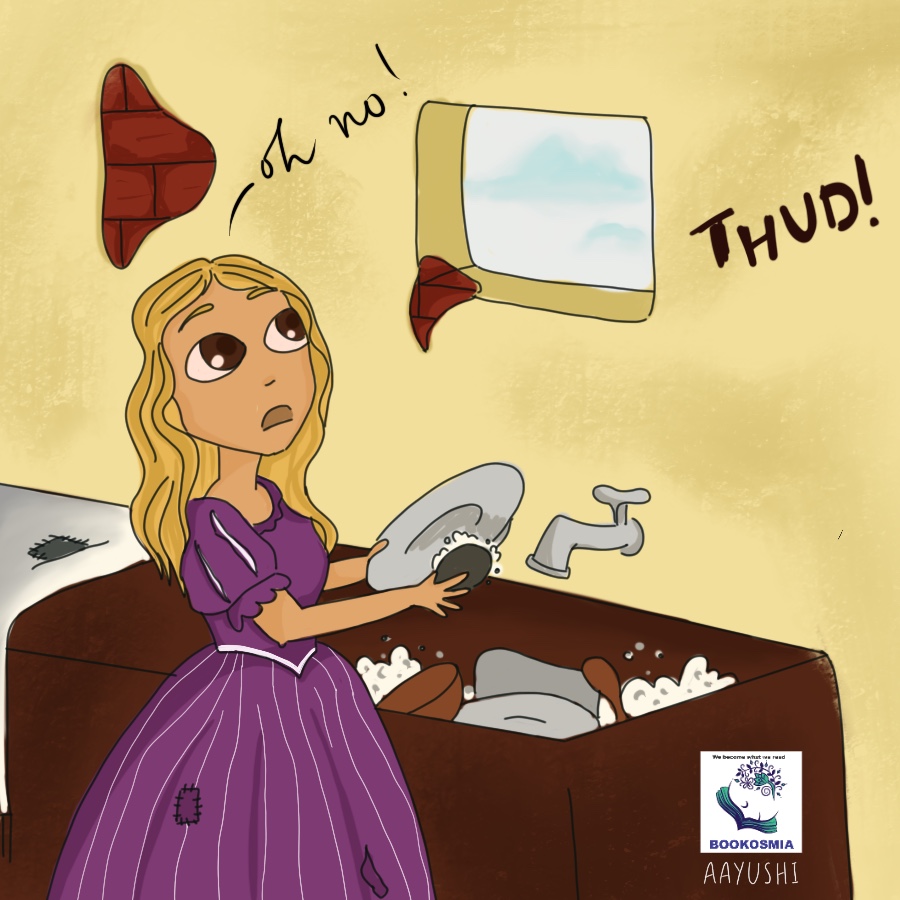 Cinderella herself now had rough hands, wore tattered clothes and her beautiful golden locks had reduced to thin strands of hair.

“I received a deal from Captain Trevor. By investing the money we have right now, we can double it in two years,” the prince rambled in a single breath before shuffling loudly into a moth eaten arm chair.

“Please do not give any more money to anyone. If your plans actually worked we would be royalty by now or wait we already are, aren’t we my prince charming?,”said Cinderella in a menacing tone. She handed him some -mushroom soup left over from the previous day‘s lunch.

“Try to keep yourself out of trouble I’m going to the Clifford‘s for my shift.”

She mumbled under her breath and left. The prince nodded absentmindedly having spotted a pint of whiskey behind the couch. Cinderella reached  Clifford’s house. The Cliffords were a wealthy family who had employed Cinderella as a nanny and house cleaner. This was the only way for her to earn a living.

“Pick up the clothes which are drying, wash the dirty dishes and then dust the fireplace,” came Mrs.Clifford’s monotonous voice as she entered the kitchen. Cinderella was quick in her work and she was soon down to the last chore, scrubbing the fireplace.

She felt an unwelcome wave of nostalgia taking her back to the days when she lived with her stepmother and stepsister. Just then a delightful cry came from a little girl entering the living room.

It was Harriet, Mrs. Clifford’s five-year-old daughter. She ran to her mother who was sitting in a plush chair sipping a cup of hot tea. “Look what I found mother how pretty it is,” she said bubbling with excitement. Even Cinderella looked up amused. However, her look of amusement soon turned into a look of anger as she saw the object.

It was a glass slipper.

Unable to control herself, Cinderella jumped up and walk towards the girl. She snatched the slipper from the bewildered child. “If only I had never left this behind on the day of the ball, maybe I would be in a better place today,” she screamed and smashed the glass slipper to the ground.

It broke into a thousand pieces, just like her dream of ‘happily ever after’ had.

3 Replies to “Not so happily ever after, Cinderella revisited- Read story with Sara”