One day I was reading my Harry Potter book and my eyes were droopy. Suddenly the bell rang. 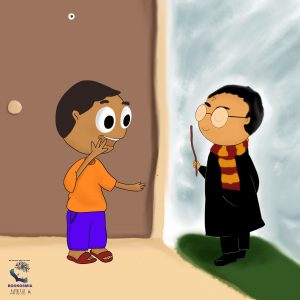 I ran to the door and to my surprise it was Harry Potter!
My mother made cake and cherry pudding for us. We were sitting by the  window when we heard a noise outside. We went out and saw a snow sled stuck behind the trees. We went near the ledge and saw a big red figure standing next to it.

I asked if he needed help. He turned around and it was Santa Claus!
He said that he was on his way to deliver presents when he slipped and the sled fell into the bushes. We managed to take the sled out of the bushes but it was broken.
“The children will be waiting for their presents. I need to deliver them on time how shall I go now?” wondered Santa.
“Maybe I can help,” said Harry Potter. He then took his wand out and said two magic words. A chair flew out from my house.
“Here you go Santa, your new sled is ready,” said Harry. Santa was very happy with this new sled that had comfortable cushions too.

He took Harry and me with him to deliver presents to the kids. He gave me a present too, the whole series of famous five. I loved it. Soon, it was time for Harry to go back to school. After he left, I saw that he had left a present for me. I opened it and found that they were crystal balls that were very colorful.
Harry had written me a note saying that these three crystal balls would grant me three wishes and I needed to use them sensibly.

The three crystal balls twinkled and zoomed around before slowly rising up into the air and disappearing into the sky. I watched them go and hoped that they make my wishes come true.